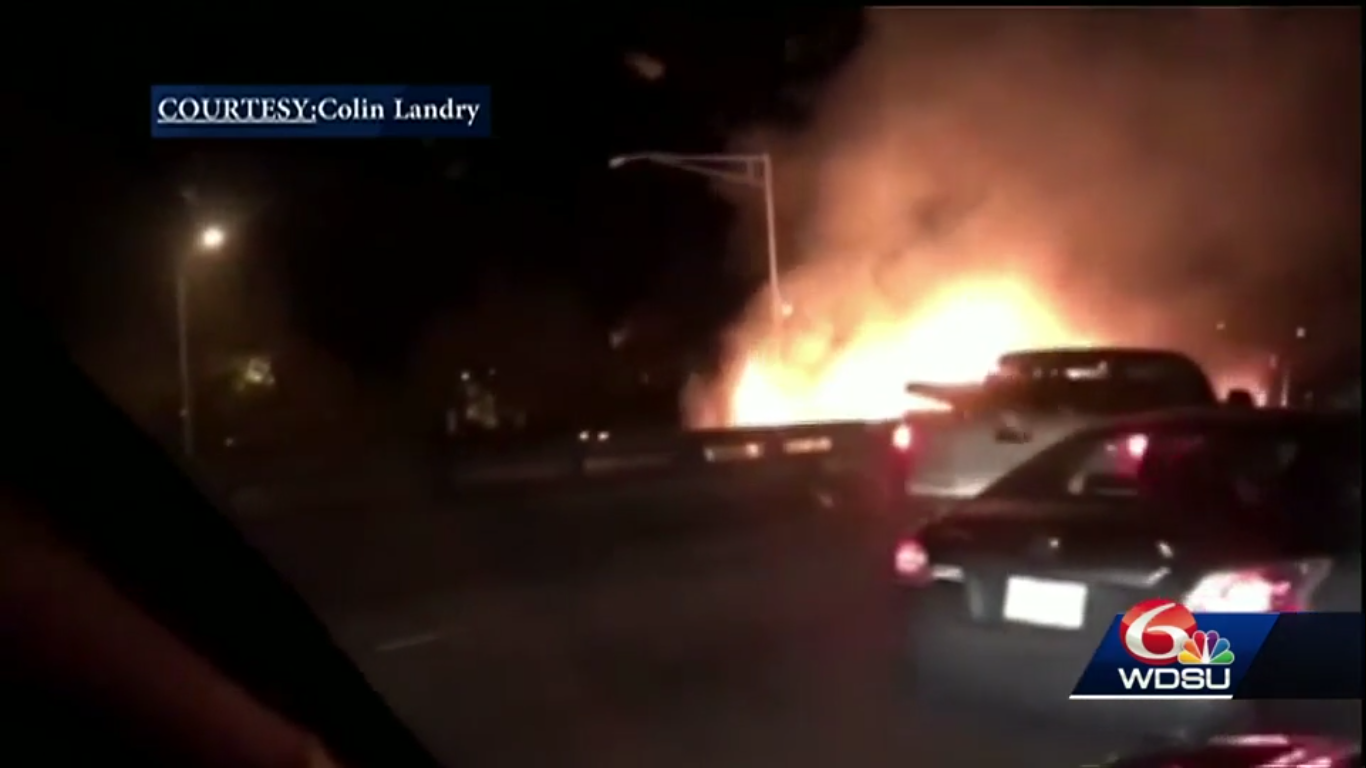 In the early morning of Wednesday, January 9th, a negligent driver sideswiped a semi-truck pulling multiple trailers. The incident led to the commercial truck toppling over and one of its trailers catching ablaze.

The driver of the semi-truck suffered only minor injuries and is expected to recover. Law enforcement agents are still looking for the driver of the Mercury Grand Marquis which caused the accident.

The hit-and-run accident took place at approximately 6:00 a.m. on Interstate 10 in Metairie. The truck was traveling to downtown New Orleans pulling a shipment of paint cans when it was struck by the driver of the Grand Marquis who was traveling in the right lane.

In the aftermath of the collision, the 18-wheeler was turned on its side including having one if its trailers flipped over the edge of the elevated expressway, damaging the road. A second trailer caught on fire, which was made worse as a result of the paint cans, which ignited as well.

The East Bank Consolidated Fire Protection District was called to the scene of the accident to control the fire.

The accident shut down the eastbound lanes of I-10 for several hours as work crews cleaned the area. The left eastbound lane on I-10 remained closed so that it could be repaired. It was reported that there was moderate damage to the bridge piers and the bottom of the deck.

Louisiana State Police troopers were able to locate the vehicle involved in the hit-and-run by Wednesday afternoon but not the driver.

Unfortunately, hit-and-run accidents and deaths are at an all-time high, according to the AAA Foundation for Traffic Safety. As per the organization:

Generally speaking, a crash is considered a hit-and-run when at least one of the drivers flees the scene after an accident without rendering aid or providing sufficient information to the other driver involved.

Depending on the severity of the accident and the facts of the crime, a hit-and-run accident can either be a misdemeanor or felony:

While accidents do happen, there are measures that you can take to better protect yourself and to limit the chance that you are the cause of a hit-and-run accident. AAA Exchange offers some meaningful tips for both pedestrians and drivers, including:

If You Have Been Involved in a Hit-and-Run

While any accident can leave you feeling overwhelmed and rattled, it is important to try to retain your wits so that you can remember as many details about the accident as possible. If you are involved in a hit-and-run accident, ask yourself:

If you or a loved one has been injured in a hit-and-run accident, do not hesitate to contact Cardone Law Firm today for your FREE confidential consultation.