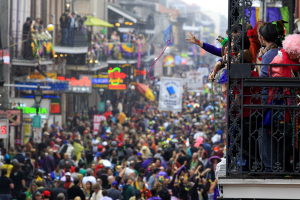 Each year, Mardi Gras attracts millions of visitors to the Big Easy. It is one of the city’s largest holidays and generates millions of dollars for New Orleans. But, with the massive crowds, rowdy celebrations, and significant alcohol consumption, an accident seems almost inevitable.

So, what happens if you are involved in an accident during the course of a parade?

LA Rev Stat § 9:2796 is a unique Louisiana statute which grants Mardi Gras Krewes immunity for lawsuits for damages caused during the course of a parade. This means that no person shall have any rights to sue any Mardi Gras Krewe organization or any of its members for any loss or damage caused by any member of the Krewe during, in conjunction with or related to any Mardi Gras parade.

A person may, however, sue for damages when:

A. The loss or damage was caused by the deliberate and wanton act or gross negligence of the krewe or organization, or any member thereof; or

B. The injury occurred while a member was operating a motor vehicle within the parade or festival and was a compensated employee of the krewe, organization, or courir.

The statute goes on to explain that parade goers assume the risk of being struck by any missile whatsoever which has been traditionally thrown, tossed, or hurled by members of the krewe or organization. These items include but are not limited to beads, cups, coconuts, and doubloons.

So, if you are slammed with an entire bag of beads or get hit in the head with a coconut during the Zulu parade, the court is likely to find that you assumed the risk, and the Krewe will not be found to have been grossly negligent. 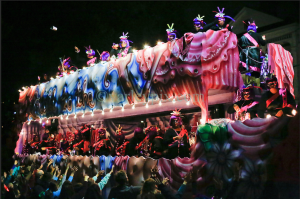 While the float krewe can avoid liability for damages, this immunity may not extend to the float builders. In April 2010, The Louisiana House passed a bill that would shield float builders from liability for accidents on the parade route. The bill would require proof of gross negligence or a deliberate act before the companies that build Mardi Gras floats could be held liable for damage, injuries or death during parades. The proposer of the bill stated that it would not extend to any claim linked to the failure in design, manufacture or maintenance of a float.

However, this proposal was rejected after Senate opponents argued that the State should not give this type of protection to private companies. A lobbyist explained that the change in legal standard would make it much tougher to hold people accountable for injuries and deaths on the parade routes. The threat of a lawsuit provides an incentive for companies to take basic safety precautions to protect riders on floats, and this law would make it too easy for companies who build these elaborate floats to escape responsibility when things go wrong.

The family of Geraldine Turner Carmouche recently filed a wrongful death lawsuit against the krewe, captain, and the driver of the float after she was run over and crushed by a tandem float during the Krewe of Nyx parade in February 2020.

The family claims that the Krewe of Nyx, the float driver, the float builder, krewe captain, and the City of New Orleans were all negligent and failed to take precautions to prevent her death. While krewe members are likely covered by broad immunity, the float builders in this case, PFJ Floats, may not be afforded the same protection.

Check out Cliff Cardone’s interview with WDSU in which he discusses broad immunity in this case: