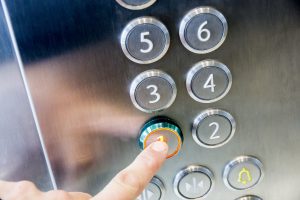 Elevator accidents can cause a lot of different injuries. Not all of them are physical, but any of them (physical or mental) can potentially be compensable with the right evidence.

Given the number of web pages dedicated to interpreting them, dreams about being inside a falling elevator are not uncommon. For most people, such a dream would certainly fall inside the definition of a “nightmare.” For an unfortunate few, however, these nightmarish events are no dream; they are all too real. When they happen, they have the potential to inflict a variety of injuries. Even if you suffer no physical damage, you may still be left with severe and lasting emotional scars from your elevator accident. If that happens to you, be sure to contact a knowledgeable Louisiana injury attorney about your accident.

END_OF_DOCUMENT_TOKEN_TO_BE_REPLACED

Wearing your seat belt is required by law and has been since 1968 when the Motor Vehicle Safety Standard was passed, enforcing all car manufacturers to build seat belts into their vehicles. That being said, driving without one on is reckless and can lead to serious injuries.

At the Cardone Law Firm, it is not our aim to point the finger at anyone’s mistakes. Instead, we aim to share over 40 years of knowledge with you about car or truck accidents. Even if you weren’t wearing a seat belt at the time of the crash, that does not mean that you completely forfeit your right to compensation.

END_OF_DOCUMENT_TOKEN_TO_BE_REPLACED

As a construction worker, you understand that there are certain dangers that come with your job. One risk that you probably don’t expect, though, is being involved in an elevator accident because the elevator malfunctions and crashes. However, that is exactly what happened to several workers working on a condominium construction project in the Central Business District of New Orleans this summer. The accident injured five and is a reminder that, as with almost anything else, elevators fail sometimes, and, when they do, people can get hurt. When that happens, it pays to have skilled Louisiana elevator accident counsel on your side.

On a promotional web page, The Standard condominium in the Central Business District is billed as boasting “a visionary’s passion for thoughtful, future-facing design.” The property is scheduled to open in the spring of 2018. In the summer of 2017, though, that design was still under construction. WWL TV reported that, on July 28th, workers next door to the project heard what they described as the sound of an elevator’s emergency braking system giving way, and then they heard the sound of the elevator crashing down seven stories to the ground.

END_OF_DOCUMENT_TOKEN_TO_BE_REPLACED

Excluding those who have a phobia about elevators, the chances are that most of the rest of us engage in the act of entering, riding in, and departing an elevator without giving it a second thought. Some people may be able to go through life without ever encountering a malfunctioning elevator. With multiple instances of elevator-related injuries occurring in the New Orleans area recently, though, it is clear that not everyone will be so fortunate. If you are injured in an elevator accident, it is important to act promptly and seek counsel from an experienced Louisiana premises liability attorney who can help you protect your interests.

One of the recent headline-making accidents was particularly unfortunate because it involved teens doing missionary work. The teens were here on behalf of their Presbyterian church located in Wahoo, Neb. and were at the home of their host family this past July when the home’s elevator crashed from the third floor all the way to the ground. All four teens suffered either leg or ankle fractures, KETV reported.

END_OF_DOCUMENT_TOKEN_TO_BE_REPLACED

Recently  a tow truck rammed into a mid-city parking lot killing three and injuring one.  The tow truck driver was also transported by EMS to a local hospital for injuries he sustained.

According to preliminary reports, the tow truck driver lost control and struck pedestrians waiting at a bus stop as well as four parked vehicles. While investigators are still trying to ascertain what caused the devastating accident, the ultimate question is: Who will be found liable for the damages?

END_OF_DOCUMENT_TOKEN_TO_BE_REPLACED

The Causeway Bridge has been described as long, scary and an engineering masterpiece. While the bridge may be all those things and more, the condition of the bridge has been a concern for years.

On August 8th, the bridge was closed in both directions for hours due to an auto accident. According to preliminary reports, Michael Gibson clipped Joey Leblanc’s truck from the rear during the process of a lane change. After riding the rails, Leblanc’s truck eventually plunged into Lake Pontchartrain. This was a very serious auto accident which could have resulted in severe injuries, however, the Leblanc was fortunately rescued by police officers.

END_OF_DOCUMENT_TOKEN_TO_BE_REPLACED

We have the pleasure of representing a family who lost their mother in a tragic car accident with a Jefferson Parish Sheriff’s deputy. The car accident occurred on April 11, 2016, approximately 4 months ago – and to date, the family has been denied access to the vehicle, denied access to the findings of the investigation and denied access to any other evidence. The Sheriff’s Office has still not returned their mother’s vehicle to the family, nor granted the family access to view the vehicle. This begs the question, is 4 months a reasonable time period to withhold evidence from a family who is seeking answers?