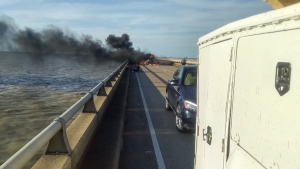 The Causeway bridge in Metairie was the sight of a fiery crash Monday afternoon.

Details of the Accident

On April 22, Causeway Police showed up to a collision which occurred at mile marker 11.1 on the Lake Pontchartrain Causeway Bridge involving a Honda and a Signworx utility vehicle. The utility vehicle was traveling southbound on the causeway when it began having mechanical issues, before eventually stalling.

The driver of the Honda failed to notice the stalled utility vehicle and subsequently rear-ended the vehicle. The collision was so severe that the Hondo caught on fire. Flames and smoke could be seen from both sides of the Causeway as crews worked hard to treat the injured and clear the lanes.

Mike Ricks, owner of Signworx, noted that two of his company’s employees were injured.

With over 180 crashes on the Causeway just this year, the city is facing pressure to complete the shoulder expansion project on the Lake Pontchartrain Causeway.

The city of New Orleans is investing $53 million to add an expanded shoulder on the Lake Pontchartrain Causeway. Work is currently underway to add six 1,008-foot long shoulders to the right side of each of the Causeway’s shoulder-less spans. The shoulders will be situated between the crossovers, giving motorists and first responders a place to pull over, out of the two lanes of traffic, where breakdowns and accidents frequently occur.

The project, which is expected to be completed by Spring 2020, is said to be the most significant improvement to the Causeway since 1969.

Crews will use nearly 200 pilings with caps to support the shoulders which will be barged to the Causeway by night.

Officials said the Causeway shoulders needed to be done as rear-end crashes occur often on the bridge when someone has a flat tire or mechanical problem, and cannot make it to a crossover. Sometimes, motorists plow into police vehicles and motorist assistance patrol trucks after they’ve responded to a crash.

Have you suffered an accident on the Lake Pontchartrain Causeway? Contact Cardone Law Firm right now at 504-522-3333 to get the support you need.