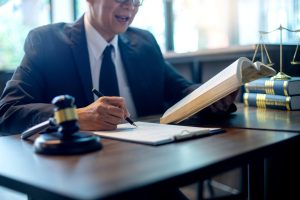 Six months after that, the case went to trial. D.T. still never got served and did not appear at the trial. During the trial, G.B. testified about statements that D.T. made shortly after the accident took place. The testimony in question indicated that D.T. asked the pair if they were all right, apologized and stated that he did not see B.T.’s vehicle. Additionally, the officer who responded to the crash completed a two-page police report and, on page 2, named D.T. as the driver who was responsible for causing the crash.

After all the evidence had been presented, the insurance company asked the court to dismiss the case because D.T. had never been served. Instead, the plaintiffs’ counsel was able to persuade the court to re-open case, which allowed them to serve D.T. and get statements from him and from the police officer. D.T.’s statement indicated that he had no defense to the plaintiffs’ claim of negligence and the officer’s statement indicated that the information in his report, including the part about D.T.’s fault, was authentic. Armed with this evidence, the plaintiff got a judgment in their favor and an award of damages.

The insurance company appealed, arguing that the trial judge made a legal error in allowing the re-opening of evidence. The appeals court ruled against the insurance company, allowing the judgment to stand. In its ruling, the court made a strong statement about the role of trial judges in cases like this. Even though the way that the plaintiffs went about handling their case procedurally was less than optimal, the trial judge was still permitted to re-open the case and take more evidence instead of dismissing the lawsuit. As the appeals court noted, it was very clear that D.T. was completely at fault in the accident, was liable for the plaintiffs’ injuries and was insured by the company on trial. “Lawsuits are not games in which courts are the mere referees or umpires, and in which technicalities must be allowed to triumph over actual justice,” the appeals court wrote in ruling in favor of the injured driver and her injured passenger.

If you are injured in an auto accident, talk to the Cardone Law Firm to find out more about how our skilled Louisiana auto injury lawyers can help you and your family get the compensation you deserve.