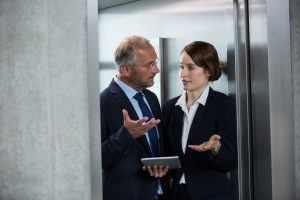 Each different type of injury case brings with it different facts and different nuances of the law. Generally, an injury case requires you, as the injured person, to prove that the defendant’s misconduct was the legal cause of your injury. Certain types of injury cases that involve claims of negligence may allow you to establish causation using an argument that goes by the Latin words “res ipsa loquitur.” While almost any layperson has never heard of this Latin phrase, it is a very familiar one to any skilled injury attorney. This is just one more example of how your case can derive vital benefits when you retain the services of knowledgeable Louisiana premises liability counsel.

This “res ipsa loquitur” doctrine within the law can come up in certain elevator accident cases. Recently, the state courts in New Jersey found themselves faced with the case of Maureen, a resident of a condominium complex in Hackensack. While she was either entering or exiting the elevator in her building, the doors allegedly closed prematurely and knocked her to the ground, injuring her.

Maureen sued the complex, the property manager, and the company that performed maintenance on the elevator. A key part of the injured woman’s case was arguing that the court could infer that the defendant was negligent, even in the absence of direct proof, based upon “res ipsa loquitur.” This Latin phrase roughly translates to English as “the thing speaks for itself.”

Currently, Maureen’s case is still pending before the New Jersey Supreme Court. So what if Maureen’s accident had occurred in New Orleans instead of Hackensack? Louisiana law, like New Jersey law, allows an injured person to establish the defendant’s negligence using this doctrine. A Louisiana case from a few years ago, although it didn’t involve an elevator, demonstrated how this process can work. A surgery patient alleged in her lawsuit that her medical providers, during the procedure, knocked out one of her teeth, that she swallowed it during surgery, and that the tooth became embedded in one of her lungs, causing her respiratory injury.

The patient’s argument was essentially this:  I didn’t have a tooth embedded in my lung (or respiratory problems) before I went in for surgery, I did have a tooth in my lung (and respiratory difficulty) after surgery, and there is no reasonable explanation for how it got there other than it got knocked out during surgery. In that case, the Court of Appeal reversed a defense summary judgment and allowed the patient to continue pursuing her case.

What degree of persuasiveness does this type of argument need to have? Louisiana courts apply the “reasonable minds” standard. That means that, as the court in the tooth case stated, as “long as the fact-finder can reasonably conclude that plaintiff’s injuries were, more probably than not, caused by defendant’s negligence under the particular facts of a case, the doctrine of res ipsa loquitur applies.”

Thus, if you’re injured in an elevator in Louisiana, and you can persuasively argue that a reasonable jury could reasonably decide your harm was, more likely than not, caused by the defendant’s negligence, this legal doctrine may be available to help your case.

There may be many different ways to go about achieving a successful result in your injury case, including an elevator accident case. At the Cardone Law Firm, our experienced Louisiana premises liability lawyers have spent many years using the legal system to get fair compensation for our clients’ injuries.