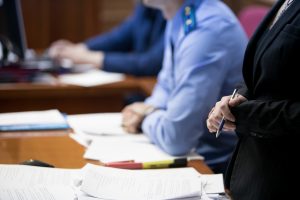 When it comes personal injury scenarios, most people will focus heavily on the factual aspects of the case – who did what to whom, who failed to do something that they should have, etc. These issues are, without question, important ones. However, when it comes to achieving success in a personal injury litigation matter, there’s much more than just that. If you want to succeed and get the compensation you need, it requires following all of the right procedures, too. This is one area among many where representation from a skilled Louisiana injury attorney can be invaluable.

A few months ago, the Court of Appeal ruled on the case of K.B. K.B. had some things going against him in the late summer of 2015. For one thing, he was locked up in the Lafayette Parish Correction Center. For another thing, his cell allegedly was near an area of leaky plumbing that caused water to seep into his cell floor. On two different occasions, one on August 31 and one on September 17, K.B. allegedly slipped and fell on the wet floor in his cell.

Based on the substantial injuries he suffered, the inmate sued the sheriff of Lafayette Parish, among others, for the damages he suffered. The defense argued that K.B. could not sue in court. Specifically, they asserted that K.B. had failed to “exhaust his administrative remedy” before suing. That meant that, according to the sheriff, K.B.’s situation was a special one that required him to jump through certain administrative procedural hoops before suing in court, and that K.B. had not done those things.

The appeals court, however, did not agree and concluded that K.B. could proceed in court. The administrative process raised by the defense didn’t apply to K.B.’s kind of complaint. The process to which the defense referred was something that applied to situations of deputy misconduct involving an inmate, not a scenario where an inmate filed a complaint seeking an award of damages as a result of a personal injury that allegedly took place in the jail due to the defendants’ negligence. Applying the process the defense cited to a personal injury situation like a slip-and-fall accident was “absurd,” in the court’s view.

There was nothing in Louisiana law that barred a jail inmate like K.B. from suing in court for personal injuries he suffered as a result of negligence, so long as he filed that complaint within the statutory limitations period, according to the court. Because K.B.’s action was timely, he was allowed to pursue it.

Now, many people who have read the preceding paragraphs may think, “I’ve never been jailed and never will be. What do this case and outcome mean for me?” Well, even if you never come anywhere near doing time behind bars, you may still quite possibly find yourself in a position where you slip and fall, and consequently suffer serious injuries due to another’s negligence. It is also quite possible that the person or entity whose negligence caused your harm was a governmental employee or entity. When that happens, the rules for pursuing the compensation you need may be different than if you were harmed by a private person or entity’s negligence. It’s just another example of how, after you’ve been hurt in a slip-and-fall accident, you need to arm yourself with legal counsel who can help get the result you deserve, regardless of who was negligent or what twists or turns your case might take.

Contact the Cardone Law Firm to find out more about how our skilled Louisiana injury lawyers can help you get the positive results you need.

Hit a Cow and Injured? We explain how to recover for your auto accident., Louisiana Injury Lawyers Blog, Dec. 20, 2018