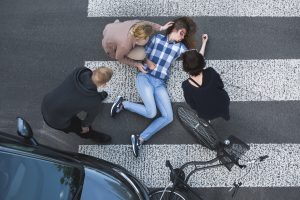 When you’ve been injured in a vehicle accident, whether you’re a pedestrian, driver, passenger or cyclist, you may have certain legal options available to you. You may know that you can go to court and sue the driver who crashed into you. But, you may not know that there’s often more to a completely successful result than that. There may be procedural maneuvers that an experienced attorney will know to make to protect your interests that you, as a non-lawyer, would not reasonably be expected to know about. In other words, your auto accident injury case is too important to leave anything to risk, so be sure you have a skilled Louisiana injury attorney advocating for you.

A case highlighting this truth was the negligence action pursued by W.B., who was a pedestrian injured in Jefferson Parish. According to her lawsuit, she was standing behind her vehicle when A.G. crashed into W.B.’s vehicle with her vehicle, causing W.B. to suffer substantial injuries.

Those injuries were the basis for her claim for damages. But there was a problem. Specifically, there was an issue with serving notice of the proceeding on the defendants. Proper service of notice is a required element of pursuing a civil case and, without it, your case can be at risk of dismissal. While the defendants were seeking to get W.B.’s lawsuit thrown out for inadequate compliance with the rules for serving notice, W.B.’s legal team filed another lawsuit four weeks after the first – in the same court and seeking damages for the same accident.

That decision proved to be very wise strategically. Five weeks after the filing of the second complaint (and two months after the first), the trial court agreed with the defense and dismissed the first lawsuit. The wisdom of W.B.’s strategy step became apparent in early 2018 when the defense attempted to get her second lawsuit dismissed. The defense argued that the dismissal in the first lawsuit meant that the court was required to throw out the second filing, as well. The defense argued that a legal rule bearing a Latin name (“res judicata”), as well as another legal concept (“prescription”) barred the injured woman from pursuing the second lawsuit. (“Res judicata” basically means “a matter already decided by the courts.”)

The courts did not agree, however. The appeals court stated that neither res judicata nor prescription barred W.B. from pursuing her second complaint based on facts as presented. So, in spite of the procedural problems that beset the injured woman’s original attempt to seek compensation and ultimately, spelled its doom, skillful use of the legal system and the procedural options available allowed her to continue pursuing her day in court and a much-needed damages award through her second filing.

We’re all knowledgeable about something. Whether you’re performing a laparoscopy, demolishing a building, manufacturing a new drug, baking a Bundt cake or laying carpet, you know the “ins and outs” of your job. If you’ve been hurt in an accident, trust your legal case to someone who’s fully versed in the “ins and outs” of the law. Reach out to Cardone Law Firm to reach one of our experienced Louisiana injury attorneys and get the legal help you need.