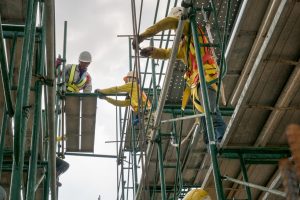 In addition, 30 others were injured as the top floors of the building crumbled down in the midst of construction. Amid the chaos, two of the three deceased still remain unrecovered within the rubble of the disaster.

According to the NOLA Fire Chief Tim McConnell, responders had initially been disallowed from entering the site due to hazardous conditions, delaying the identification of the victims and furthering the suffering of the community. It was eventually revealed that the families of the deceased are now rightfully filing wrongful death lawsuits.

WDSU News reported on numerous allegations made against the designers and developers of this property at 1031 Canal, including:

Without a doubt, those who are affected the most by this tragedy are the victim’s loved ones. For this reason, damages filed include mental anguish on behalf of the families in addition to the wrongful death of the construction workers who needlessly died.

In the case of the Hard Rock Hotel collapse, numerous factors would lead somebody affected to filing a claim for wrongful death. According to the Louisiana Civil Code Section 2512.2,  a wrongful death is defined as a claim made when “a person dies due to the fault of another”.

Claims can legally be made by the surviving spouse, children, siblings, or grandparents of the deceased person–as allotted by each individual case. Damages that can be claimed in these scenarios include:

The statute of limitations for filing a wrongful death is one year after the incident that caused the death occurred, meaning that those affected by negligent construction accidents where a loved one perished must pursue their compensation in a timely and efficient manner.

A Wrongful Death Attorney Working Around the Clock for You

This incident is tragic and could ultimately have been avoided if proper protocol and safety equipment was issued. The surviving loved ones affected by these events–and other types of negligent accidents that cause death–deserve justice and care. These incidents are not nearly as uncommon as they should be, so it is vital to become informed on your rights as a mourner or a survivor.

In order to navigate these matters as smoothly as possible, reach out to an experienced New Orleans wrongful death attorney like Cliff Cardone of the Cardone Law Firm. He will provide you with the information and legal counsel needed should an unfortunate accident occur and cost you expenses and injuries through no fault of your own.

Contact us at 1(888) 89-CARDONE to schedule your FREE legal consultation today.